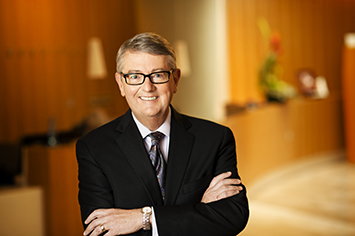 "The people of Sharp change the lives of individuals each and every day, and I am grateful to be part of this great health care system."

Gross began his career at Sharp in 1979 as a clinical nurse at Sharp Memorial Hospital. Over the years, he served as clinical nurse IV, director of patient care services, regional director of critical care, regional director of patient care services and system vice president of clinical services. Prior to his role as executive vice president, Gross was chief executive officer of the Sharp Metropolitan Medical Campus for 11 years, where he had oversight of three hospitals, an outpatient surgery center, home care services and two senior centers.

His awards and honors are numerous and include the SDSU Alumnus of Distinction Award from the College of Health and Human Services (1999) and the USD Author E. Hughes Career Achievement Award (1999). In 2002 he was named the American Heart Association Volunteer of the Year, and in 2003 he was named the Outstanding Alumnus of the Year by Independence Community College, KS. In 1998 and 2007, Gross received the leadership award from HASDIC. He is also the recipient of the California Health Foundation and Trust 2010 Walker-Sullivan Health Care Fellowship. In 2012, Gross received the CHA Award of Merit, and in 2017 he received the American Hospital Association's Board of Trustees Award.

Gross received his BSN from Wichita State University, his MS in nursing administration from SDSU and his DNSc from USD.