Elbert McCune recently celebrated his 100th birthday. He shares his tips for a long life.

Elbert McCune has two tips for living a long life: Be active as much as possible and stay away from electronic devices.

Those around McCune should be wise to listen — the retired Navy captain just celebrated his 100th birthday.

"Mr. McCune is a very easy patient to care for," says Dr. Brian First, McCune's doctor for the past 15 years and medical director of Sharp Senior Health Centers. "He has never been hospitalized under my care, which is a testament to his good health." 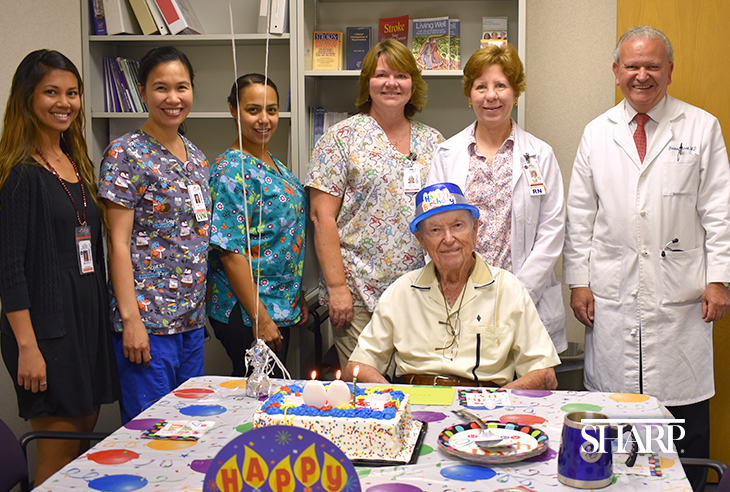 Elbert McCune celebrated his 100th birthday with his caregivers at the Clairemont Sharp Senior Health Center.

McCune grew up in Missouri and lived through the Great Depression and World War II. He moved to San Diego in 1948 after joining the Navy.

He says the highlight of his Navy career was escorting President Franklin D. Roosevelt to a conference. He married his late wife, Edna, in 1956 and eventually settled in Serra Mesa.

McCune believes remaining active is the key to living a long and healthy life. "I try to stay on my feet at least 80 percent of my day," says McCune, whose only communication device is a home phone that he keeps in case of an emergency.

Genetics may also play a role in his longevity. McCune's mother and a majority of relatives on her side of the family lived for more than 90 years.

Dr. First says McCune is quite healthy. He only schedules visits with McCune a few times a year to make sure he has no health concerns.

McCune says he hopes to continue spending time with friends, taking care of his home and discovering new activities to keep him busy and enjoying life.

A special ‘thank you’ for a special doctor

It’s clear to his patients that Dr. Andrew Hampshire puts people at the center of his work.

Improve your health during the COVID-19 pandemic

From better sleep to more time to move, there are health benefits to staying at home.

How to refill a prescription during the COVID-19 pandemic

Due to COVID-19, some health plans are allowing early refills of maintenance medications.