Denise Kelly works for Sharp HospiceCare, but she also owns and operates her family’s Christmas tree farm with her husband, Ed.

Denise Kelly has been the program coordinator of volunteer services for Sharp HospiceCare for almost nine years. Every holiday season, however, you may find Denise in her other "office": the Julian Christmas Tree Ranch.

Though hospice care and conifer tree husbandry may seem unrelated at first glance, both of Kelly's occupations are defined by careful compassion and the preservation of memories.

A family tradition
The Julian Christmas Tree Ranch has been in Kelly's family since 1947. It all began on her grandparents' land, then known as a guest ranch, when her father wanted to earn money to buy his own tractor. He reached a deal with another landowner to cut the trees on his property to sell as Christmas trees, using a special method to preserve the plants. His trees soon became highly coveted — businesses and families came year after year from near and far to get their own Julian Christmas Tree Ranch white fir.

Growing up, it was a cherished family tradition for Kelly to help out on the ranch each winter. As business for her father's construction company wound down for the year, she and her siblings would join his employees in staffing the tree operation. 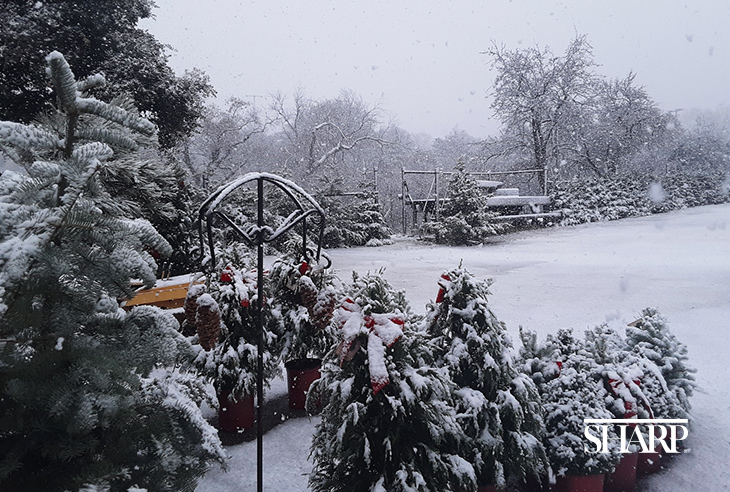 "It has become tradition for generations of my family and many others," Kelly says. "People come for the full experience. It's so picturesque, like a real-life Christmas card, especially when we get snow in the mountains. We have hot cocoa, coffee and farm animals, and you can purchase wreaths, 'critter cones' — cute treats to leave out for birds and squirrels - and other holiday decor made from our trees."

That something special
There are two main distinctions between the Julian Christmas Tree Ranch and your average tree lot. First, their trees are white firs.

"Our trees aren't your typical noble or Douglas fir," Kelly says. "They have a unique, almost old-fashioned look. Each tree has its own personality."

The other major difference is that the Julian Christmas Tree Ranch is full service. Skilled workers, including Kelly's own sons, shimmy high up the tree to make the cut, while crew members below — affectionately known as "ground squirrels" — ensure the tree never crashes to the ground. They also make sure the tree is safely and securely loaded in your vehicle before you take it home.

This is more than just top-notch service; it is also a practice in sustainability. That's because they don't cut down the whole tree to sell it. Instead, trees grow for at least 10 years before the top portion is harvested. The lower ring of branches then compete to become the new top. Three to five branches are removed, with the strongest ones left to become the site for two or more Christmas trees to grow from a single trunk, all with the same roots. 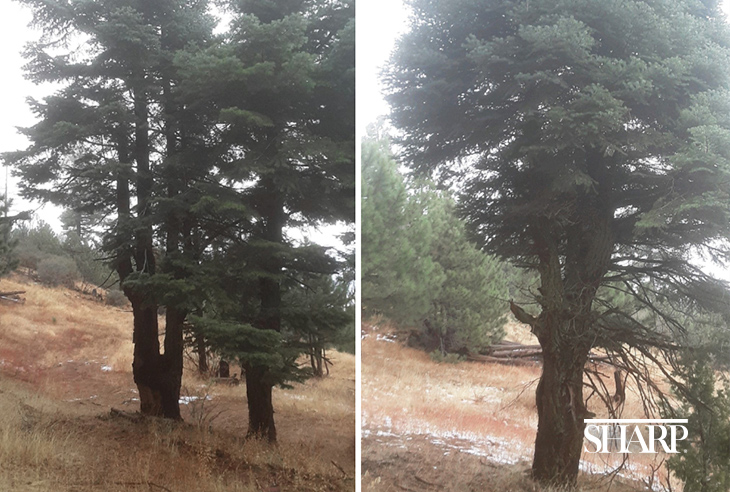 The trees at Julian Christmas Tree Ranch are grown and cut in a unique way that preserves the tree's roots and allows multiple new trees to grow from a single trunk.

While the employees carefully preserve and cultivate future trees, the families who come to the Julian Christmas Tree Ranch are also preserving the past and forming new memories.

From rancher to hospice care
Eventually as Kelly's father grew older, she and her husband happily assumed the role of running the family business with the help of their sons. Then, Kelly's father passed away in hospice care in 2001.

"We were all so impressed and grateful for the care and support services we received that after my grieving period, I knew I wanted to give back," she says. "A friend who worked for Sharp suggested that I look into volunteering with the hospice team."

Kelly immediately fell in love with the work and several years later, a full-time position became available. Her passion and experience as a volunteer made her a natural fit for the role of manager of volunteer services.

Kelly says she cannot think of two more rewarding jobs. She feels that the joy and liveliness found at the Julian Christmas Tree Ranch are a good balance to the loss and grief of working with those at the end of their lives.

Years later, she is still driven by the same devotion. "I am honored to be in an environment filled with so much love and compassion," Kelly says. "As hospice employees, we walk beside our families and serve as companions in hard times."

Making the most of holidays during quarantine

You might not be able to celebrate holidays with family this year. Here’s how you can get creative.

Is social isolation easier for introverts?