Emily Mesa holds her daughter, Madilyn, for the first time following her heart transplant in July at Sharp Memorial Hospital. Due to safety restrictions, only her husband, Gabriel (left), had been able to visit her.

Doctors were pretty sure that Emily Mesa had COVID-19.

The otherwise healthy 23-year-old sitting in their Riverside County emergency room was showing typical signs of the disease, including extreme fatigue and shortness of breath. They ordered a test and sent Emily home with instructions to self-isolate until the results came back.

But it wasn't coronavirus. Emily's young heart was suddenly failing — and fast. Within a few weeks, the new mother would need a heart transplant to stay alive.

'Something was really, really wrong'
Emily looks back on Memorial Day as her "last normal day," which she spent with her husband, Gabriel, and their infant daughter, Madilyn, at their home in Murrieta.

Within a few days, however, she began to feel exceptionally tired, and not just the typical exhaustion that comes from keeping up with a 6-month-old. She could barely get out of bed and soon developed shortness of breath.

"At the ER, they told me it was probably COVID, so I figured that must be it. I mean, what else could it be?" Emily says. "But over the next few days, I felt worse and worse. When the test came back negative, I knew something was really, really wrong."

Gabriel took Emily to a different Riverside County emergency room, where doctors performed an echocardiogram and discovered that her heart was barely pumping blood to the rest of her body.

At first, Emily's primary care doctors tried to reverse her heart failure with medications. After a few weeks, it became clear she needed to be hospitalized, and Emily was admitted to Sharp Memorial Hospital to await a transplant. Because her heart was failing so rapidly, Emily was placed in the most critical tier on the nation's organ waiting list and received a new heart five days later. 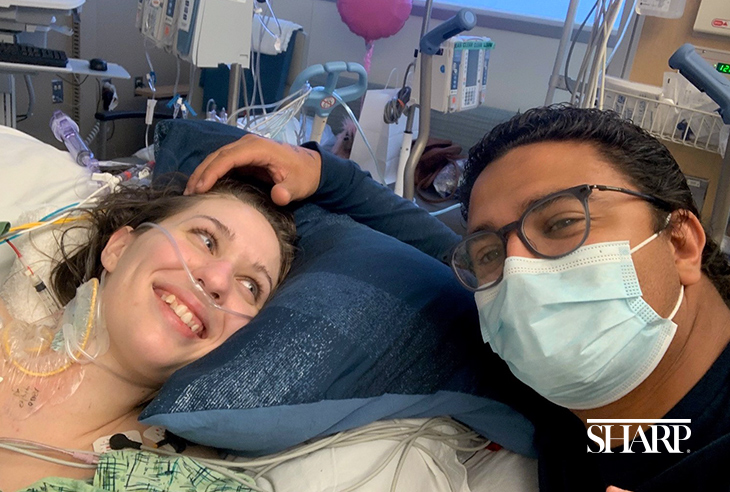 Emily's husband, Gabriel, visits her in the intensive care unit the day before her heart transplant at Sharp Memorial.

A rare condition
What caused Emily, a healthy 23-year-old, to go into rapid heart failure?

According to Dr. Brian Jaski, Emily's cardiologist who is affiliated with Sharp Memorial Hospital, the answer is likely tied to her pregnancy.

"There's a strong history of heart failure in Emily's family; both her mother and grandmother had similar conditions," Dr. Jaski says. "But it was probably the stress on her body from being pregnant with Madilyn that unmasked her risk for this genetic disease."

Emily's condition, known as peripartum cardiomyopathy, is rare — it affects about 1,000 of the estimated 3.5 million women in the U.S. who give birth each year. Only 10% of women with the condition will need heart transplants.

Peripartum cardiomyopathy typically occurs during the last month of pregnancy or within five months after giving birth, Dr. Jaski says. The condition causes the heart's chambers to enlarge and the muscle to weaken, decreasing the amount of blood pumping out to the rest of the body. Patients with this condition — and any kind of heart failure — often experience fatigue and shortness of breath as a result.

Emily says she had a difficult pregnancy with Madilyn, but mostly because the growing baby sat on top of her sciatic nerve, which caused a lot of pain. Through it all, Emily kept working at her job at Costco, although she now wonders if the occasional fatigue she brushed off as common to all pregnant women was something more.

"Throughout this entire time, Emily has demonstrated remarkable courage," Dr. Jaski says. "It was clear she wanted to get better both for herself and for her family."

Moving forward
Emily spent two additional weeks at Sharp Memorial following her heart transplant. Because of safety restrictions due to COVID-19 and Emily's own weak immune system, only her husband was allowed in the hospital; relatives took care of Madilyn during his visits.

As soon as she was healthy enough, however, Emily's caregivers arranged for a brief reunion with her daughter in a protected area outside the hospital.

"That was a really powerful moment," Emily says. "You can see in all the pictures that I'd been sobbing while holding her. It just hit me how upside down our entire lives had turned in only a few months, how I almost wasn't here for my daughter."

Before she left Sharp Memorial, Emily visited a lab where she was able to see her old heart — often an opportunity for closure for patients who've undergone such a transformative experience.

"It was massive," says Emily, whose heart weighed 384 grams, at least 50% larger than normal women of her age and small body size. "Seeing it and holding it was surreal."

Emily continues to recover from her transplant at home. So far, her body has shown no signs of rejecting the heart. Because of COVID-19, Emily has to be even more careful about exposure to illness; heart transplant recipients take several medications that weaken their immune systems so their bodies don't reject the new organ.

That's fine with Emily. She's grateful for the time with her husband and daughter.

"All I've ever wanted to be was a wife and mother, I love them more than anything," Emily says. "God really changed me and my faith during that month, and I know I'm able to be a better mom and wife with my new heart." 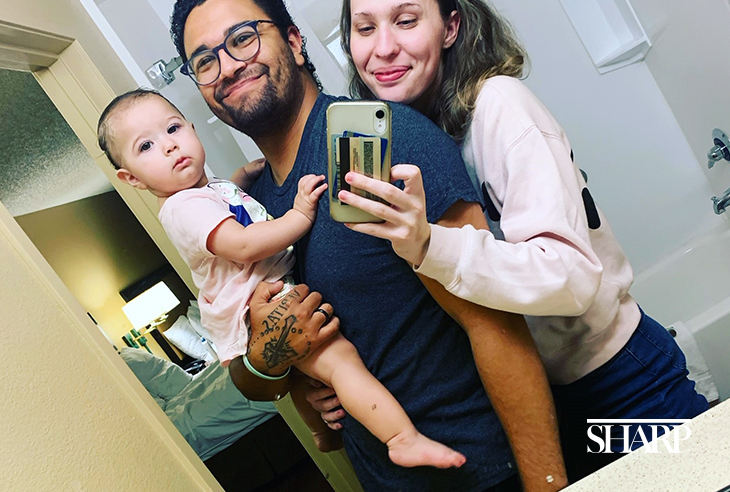 Emily continues to recover at home with her husband, Gabriel, and their daughter, Madilyn.

A WWII vet’s will to live

Seymour Schpoont, 94, has lived a full life and looks forward to more years ahead.

How hope led to a new heart

Harold Rucker believed he had just 6 months to live until a doctor gave him hope for more.

The power of acceptance

How accepting the past can impact mental health.